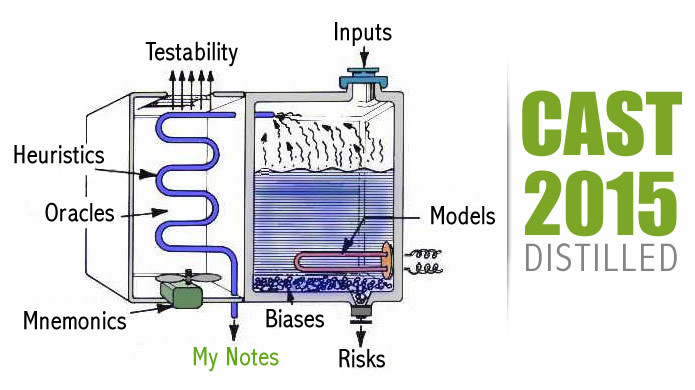 Brian Kurtz and I recently traveled to Grand Rapids, Michigan to attend CAST 2015, a testing conference put on by AST and other members of the Context-Driven Testing (CDT) community. I was rewarded in a myriad of ways such as new ideas, enhanced learning sessions, fresh models, etc, but the most rewarding experience from the conference lies in the people and connections made. The entire CDT community currently lives on Twitter, so if you are new to testing or not involved in social media, I would recommend that you begin there. If you are looking for a starting point, check out my Twitter page here, Connor Roberts – Twitter, and look at the people I am following to get a good idea of who some of the active thought leaders are in testing. This community does a good job on Twitter of actually keeping the information flow clean and in general only shares value-add information. In keeping with that endeavor, it is my intention with this post to share the shining bits and pieces that came out of each session I attended. I hope this is a welcome respite from the normal process of learning that involves hours of panning for gold in the riverbanks, only to reveal small shining flakes from time to time.

Keep in mind, this is only a summary of my biased experience, since the notes I take mainly focus on what I feel was valuable and important to me based on what I currently know or do not know about the sessions I attended at the conference. My own notes and ideas are also mixed in with the content from the sessions, as the speaker may have been triggering thoughts in my head as they progressed. I did not keep track or delineate which are their thoughts and which are my own as I took notes.

It is also very likely that I did not document some points that others might feel are valuable, as the way I garner information is different than how they would. Overall, the heuristic that Brian and I used was to treat any of the non-live sessions as a priority since we knew the live sessions would be recorded and posted to the AST YouTube page after the conference. There are many other conferences that are worthwhile to attend, like STPCon, STAR East/West, etc. and I encourage testers to check them out as well.

“Building A Culture Of Quality” by Josh Meier

My Conclusion: Yes and No. No, because value can be added without becoming technical; however, if your environment would benefit from a more technical tester and it’s something you have the aptitude for, then you should pursue it as part of your learning. If you find yourself desiring to do development, but in a tester role, then evaluate the possibility that you may wish to apply for a developer position, but don’t be a wolf in sheep’s clothing; that does the product and the team a disservice.

“Bad Metric, Bad” by Joseph Ours

“The Future Of Testing” by Ajay Balamurugadas

“Reason and Argument for Testers” by Thomas Vaniotis and Scott Allman

“Using Tools To Improve Testing: Beyond The UI” by Jeremy Traylor

“When Cultures Collide” by Raj Subramanian and Carlene Wesemeyer

I hope that my notes have helped you in some way, or at the very least exposed you to some new ideas and knowledgable folks in the industry from which you can learn. Please leave comments here on what area you received the most value from or need clarification. Again, these are my distilled notes from the four days I was there, so I may be able to recall more or update this blog if you feel one area might be lacking. If you also went to CAST 2015, and any of the same sessions, then I’d love to hear your thoughts on any important points I may have overlooked that would be beneficial to the community.