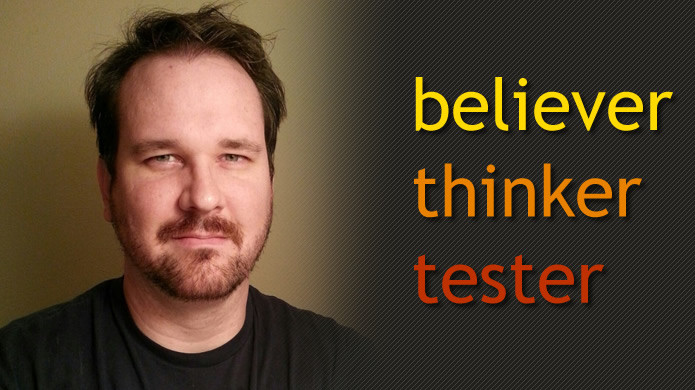 I am a passionate critical thinker with a background in leadership, coaching, testing, quality and agile engineering practices (small-a agile, not Big-A Agile – more on that in a video here). I was born and raised in Dallas, Texas, USA, where I still live today with my wife and three children. by day, I coach and mentor software delivery teams on health engineering practices that help us shift our risk mitigation deeply into the left side of the timeline, before hands-on-keyboard coding even occurs – what risks do we observe and own as a team. This involves using certain models, practices, heuristics and oracles to identify certain risks earlier in the design and architectural process. Many team members have never been exposed to a lot of these tools and models that I speak of, but when they harness them in their day to day Scrum, Kanban or other process (since they are contextually beneficial and framework agnostic), they find they become free from the self-imposed constraints of which they weren’t even consciously aware of until that moment. This is my favorite sight to see as a coach; that lightbulb clicks when a developer learns about testability in code scalability and maintainability, or a tester sees that you do not in fact have to document heavy test cases before doing actual testing. Freeing people’s minds from the confines of an industry that has taught them how to only be checkers and not critical thinkers is what I do. My passion is ultimately to help others think critically about software developments (coding, testing, product ownership, automation, etc) which I believe is something that can be awoken within someone when it is dormant.

My formal education is in the form of a bachelor’s degree in ATEC from The University Of Texas at Dallas, where I took just enough programming classes (six) to realize that the fun I had writing code since high-school was about the extent of my desire to create code. I still like coding from time to time, but mostly to aid in quality processes and testing upstream to as a proactive measure at work, or as a personal challenge. I believe it is critically important for everyone on a software delivery team to be able to read and understand code logic, even if they cannot write it themselves (though that sure does allow you to bring more value to a team).

With my formal testing experience beginning around 2005. I have worked in the entertainment, security, financial and technology industries in my career thus far, with consultation and coaching work in other fields of study. I am an avid believer in the Improvement Continuum, which basically says, in a nutshell, ‘one can never unintentionally plateau in learning’. I believe that the pursuit of this learning, which has intellectual humility at its heart, is key to continually getting better at one’s skill-craft – we must move the programming, testing and agile communities out of their infancy.

An aside: At the beginning of my career, I saw myself as a ‘product gatekeeper’ of sorts. This provided me a false sense of entitlement since I felt it was my responsibility to make the final go/no-go call for a release (I wrote an article about this to go deeper: My Testing Journey). This was mainly a product of working in an environment of under five people, where we all wore multiple hats, but as I matured in my understanding of what it meant to be a tester, I realized that I was missing the mark. I’ve been through the muck and mire, but have been blessed to have strong mentors along the way that aided in my growth as a tester. I had to realize that learning was the key to my continued growth, the first step involving becoming humble enough to realize that I did not have things figured out – I had to assume there were flaws with my thinking. It has been my experience, that the best learning comes from working with people you respect so that you can let your guard down to become a better version of yourself.

I am also an involved and zealous member of the context-driven testing (CDT) community always seeking to improve my understandings of both established and new engineering, development and testing concepts. I have found my interactions with others in this community to be extremely beneficial and rewarding over the years. There’s a popular phrase that goes…

I believe that my mentality in how I approach life, and my engineering career specifically, is the average of the five people from which I’ve gained the most on-earth learning: Grant Gassiott, Kyle Carper, Brian Kurtz, James Bach and Michael Bolton. Thank you, and all of those in the community that I interact with daily; you’ve had an immense positive impact on my life.

On a lighter note

Now yes, of course I have a life outside of testing. I have a wife and three children, two boys and a girl. I live to spend time with them. If someone came to me today and said, “I’ll pay you to stay home with your family all the time,” then I’d do it in a heartbeat. My parents still live in the Dallas area, and they were the strong moral foundation I had growing up that kept me centered. I also have an older brother who was my role model growing up. He always looked out for my best interests, even when he had much better things to worry about. As a younger brother by five years, I annoyed him plenty more than my fair share, but he took it in stride and loved me through it. I do not have much memory of my early childhood, but I vividly remember one time when in the middle of an argument with me, he turned to the side and firmly planted his forehead into the wall next to us. This was unlike him, as he never lashed out of showed anger; however, this was a way of getting his frustration out on an inanimate object instead of giving me the pummeling I deserved. He took a sizable chunk out of the sheetrock, at which point both of us looked at each other and whatever we’d be arguing about didn’t seem to matter at all. We knew instantly that he’d be in big trouble for that, but I still do not remember receiving any trickle-down anger or collateral damage or backlash that I definitely deserved for driving him to such an extreme. Every now and then we’ll run across the old audio cassette tapes in storage from the early 1980’s and pop them in the player. You can hear me making unintelligible noises, typical of a second child, and my older brother Dustin saying, “My little buddy, my little buddy,” talking to me in a loving voice. This remained the foundation for the tone of our friendship as we grew. I miss my brother, a lot these days, especially since we live fairly far apart now, but we do our best to get our families to meet up every now and then to make new memories.

Rapid fire: i am a former Eagle Scout. I am a Troop Master for a Trail Life USA troop that I founded in 2014. I play guitar. I use to write programs for TI-calculators in the 90s, when I was in high-school, and hey look – a few of the programs are still around. I enjoy all kinds of music, from Bob Schneider and needtobreathe to fantastic female vocalists like Alizée and Taylor Swift (no shame). I have a soft-spot in my heart for the Indian culture, everything from their cuisine to their cinema, but really it’s their people that have made me feel most loved. While, I could stay up all night eating the spiciest Vada Pav and watching cheesy Bollywood movies, it is through strong personal relationships with some fantastic engineers and leaders that I have come to love the culture. One day I will get to go to India, but that’s another story. Other loves include gaming, road-trips, rock-climbing, camping, hiking, exploring, driving without a destination in mind, having deep discussions with total strangers, and time with my two dogs, Daisy and Duke.